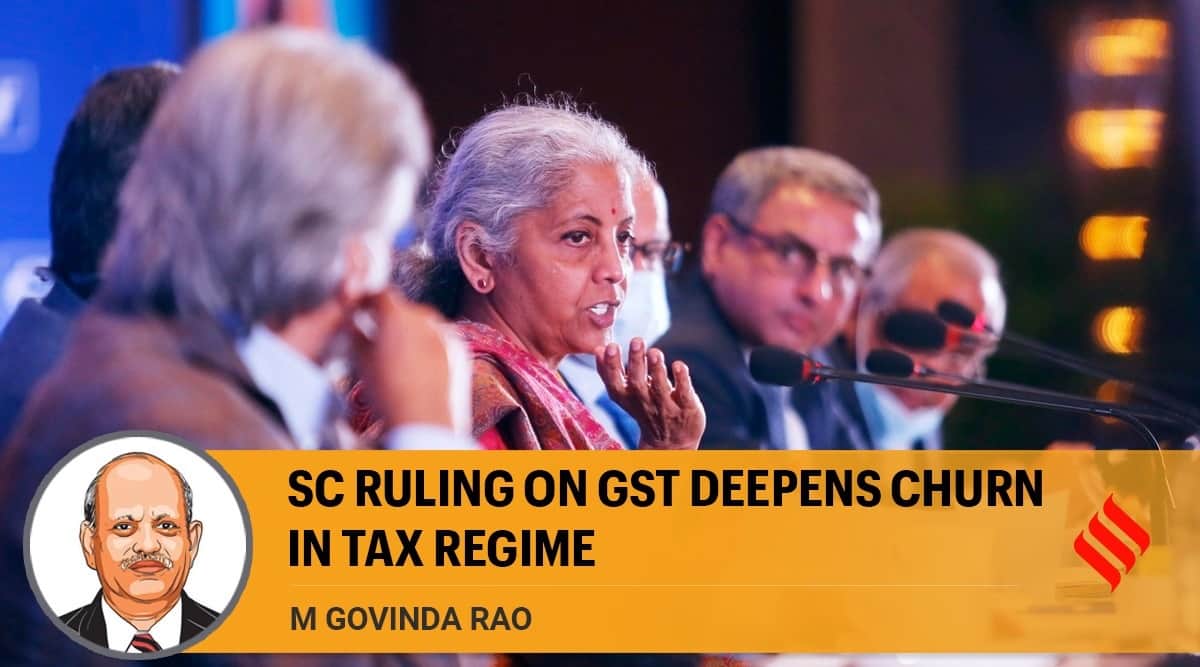 Last week, the Supreme Court ruled that the decisions made by the GST Council are recommendations only of “persuasive value” and are not binding. The decision raised serious questions about the stability and certainty of the structure and functioning of the GST which is still evolving. Although the judgment concerned the long-standing dispute over the levy of IGST (Integrated GST) on ocean freight charges paid by importers, the broader issue of the applicability of GST Board rulings has broad implications. repercussions.

The court rejected the Centre’s assertion that the entire structure of the GST would collapse if the Council’s decisions were not held to be binding. While states, especially those led by non-BJP parties, hailed the ruling declaring it a triumph of cooperative federalism and giving them enough leeway to have a say in decisions, the secretary Revenue clarified that the SC had simply stated the obvious, and, in effect, did not alter the situation on the ground. All decisions taken in the Council are based on consensus (except that on lotteries) by the Union and the States (and the Union Territories with the Legislatures), and this spirit will continue to guide deliberations and decisions in within the Council.

In some respects, the verdict states the obvious. Section 246-A inserted after the 122nd Constitutional Amendment states that “Notwithstanding anything contained in Sections 246 and 254, Parliament and, subject to subsection (2), the Legislature of each State, have the power to make laws in respect of the GST imposed by the Union or by that State.Thus the power to levy the Central GST (CGST) belongs to Parliament, the power to levy the State GST (SGST) belongs to the State Legislatures and Parliament has the exclusive power to legislate with respect to the GST on items which form part of inter- commerce or state trading.Thus the GST Board is only an advisory body and the actual decisions regarding standard GST levies, levy principles, allocation of GST levied on supplies between states, place of supply principles, exemptions and tariff structure and any special provisions will have to take either by Parliament in the case of the CGST and IGST, or by the States in the case of the SGST.

Taken to the extreme, it can open a Pandora’s box. This is because decisions on the structure and operation of the tax can be made by the Center and individual states without discussion or deliberation in the Council and both can disregard any recommendations made by the Council.

Henceforth, an important objective of the reform of the GST was to achieve harmonization of the collection of internal consumption taxes both by the Center and by the States renouncing their fiscal autonomy. But the judgment reiterates that the sovereign right to levy the tax still exists with Union and state governments and that it is up to them to consider the Council’s recommendations. In other words, the chance of having harmonized GST and tax system reforms will crucially depend on continued negotiations and bargaining between the Union and the states. In other words, intergovernmental cooperation has been maintained to ensure a harmonized GST and unless the Center and the States see the gains, the reforms will be hard to come by and if the Center wants the reforms more than the States, it will have to ensure the “membership” of the States to accept the reform.

But, given that the GST Council has been declared a persuasive advisory body only, what happens to the dream of having one harmonized nation, one tax, if a state or group of states decides to deviate from it?

Past experience shows that this is unlikely to happen. But the ruling sets the stage for more intensive haggling and negotiation, putting states on an equal footing with the Center in making decisions about the structure and operation of the tax. At present, decisions are approved in the GST Board when passed by a majority of three-fourths of the weighted votes of members present and voting, with the Center having one-third and the individual States (and the UTs) having an equal share of the remaining two-thirds weigh. However, in the past, all decisions of the Council were made by consensus (except in the case of determining the rate of lotteries), and the Supreme Court decision reinforces this convention. In some ways, this resembles the recommendations of the Finance Commission on fiscal decentralization and subsidies, which by convention have always been accepted and implemented by the government.

Opposition-led states are happy with the decision, not because they want to be able to change the structure, but because it increases their bargaining power. The immediate impact of this will be negotiations by states to extend the period of compensation for lost earnings. As the five-year compensation period ends at the end of June and the tax structure is not yet stabilized, the States have requested the extension of the compensation period for an additional two to three years and this decision will help now states have to negotiate hard for the extension.

However, although the compensation tax collection period has been extended to March 2026 to meet the interest and repayment requirements of the funds borrowed from the RBI to meet the compensation requirements, the durable solution is to increase the productivity of tax revenue by reducing the list of exempt items, rationalizing tariffs and taking administrative measures. These reforms will require strengthening the cooperative spirit.

The Supreme Court’s ruling that the Union and the States have “equal, concurrent, and sole powers” to enact GST laws and that GST Board recommendations are not binding on them will have significant implications for determining the nature of the tax which is always evolving. Moreover, this comes at a time when reforms need to be set in motion and hopefully the Court’s decision will further the spirit of cooperation in reforming the domestic consumption tax system in the country.

The author is Chief Economic Advisor, Brickwork Ratings. He was a member of the 14th Finance Commission and a former director of the NIPFP. Views are personal