The problem with Baltimore’s “TIF” strategy 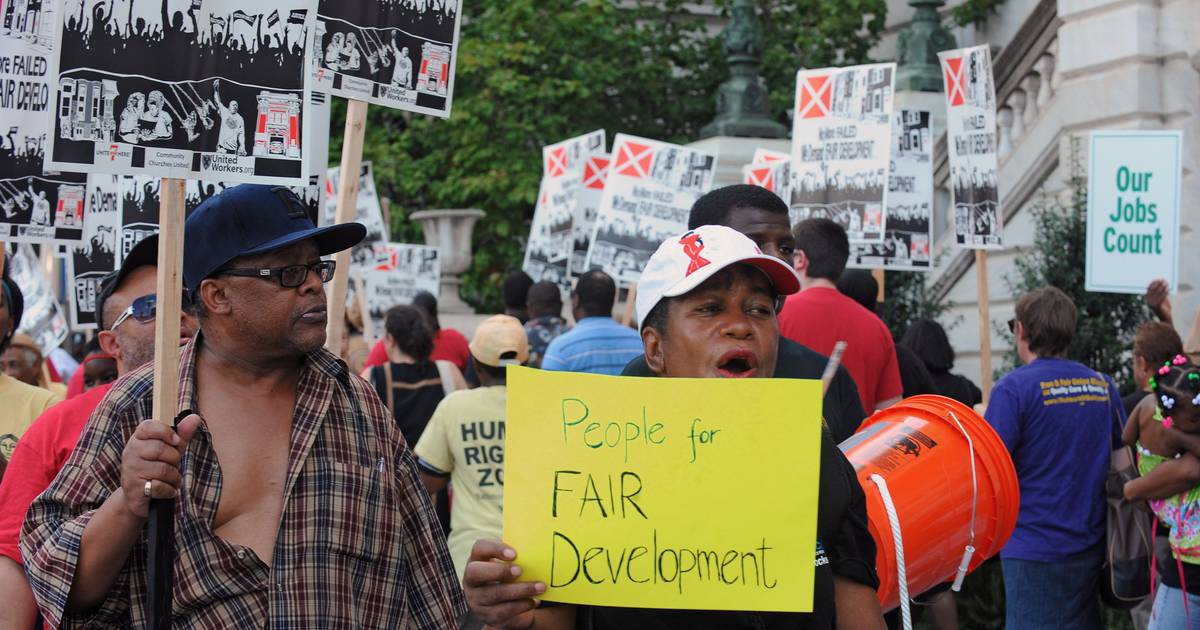 As legendary heroes, Robin Hood is as popular as any. Who can be against stealing from the rich to give to the poor? Unfortunately, for too long Baltimore has employed a redevelopment strategy that does the opposite: we frequently punish the poor and working class while privileging the well-connected and affluent.

The latest example is a proposal to create a “downtown TIF district” to save this area from decline. For readers unfamiliar with the latest urban renewal jargon, “tax increment financing” is giving developers a large subsidy on the initial costs of their project. Usually, the local government borrows a large sum of money (via a bond sale), hands it over to the developer for “infrastructure costs”, and then hopes to pay off the debt by collecting future property taxes from the developer.

TIFs are Baltimore’s preferred method of attracting new investment, as the city’s confiscatory property tax rate – more than double that of the surrounding county – repels investment and has therefore contributed to job drain, population loss and poverty for decades. City officials (or at least some of them) know this to be true, but rather than solving our basic problem via tax reform aimed at a competitive rate, they are relying on TIFs and other special grants to further align the costs of new projects here. with other areas.

There are two problems with this: it doesn’t work, and it’s terribly unfair.

Baltimore has been funding large-scale downtown renovation projects since the Charles Center in the late 1950s, and with every ribbon cutting we heard it was the start of a Renaissance. Indeed, city officials are heralding our latest grant-funded project – the new Lexington Market – as proof that finally, “rebirth is on the horizon.”

It’s pretty to think so, but all the evidence points in the opposite direction: Baltimore has lost population in every census since 1950, even as other cities with better investment climates have seen real and sustained recoveries. This has been true as crime rates have risen and fallen and as TIFs have grown in size and number.

At over 80 square miles, however, Baltimore is just too big for TIFs to do much good. Grants may attract new buildings to a few hundred acres here or there, but as we continue to punish many more small investors – those doing home improvements or start-up businesses – the rest of the city is in a long, unrelieved decline.

The best proof of the inadequacy of the TIF/subsidy approach is the city’s remarkable stock of abandoned houses (estimated today at more than 15,000). Consider what must be true for a person to walk away from their property: the cost of ownership – not just the expense of maintaining or improving it, but the tax payable when doing so – simply exceeds benefits. A grant could help reverse this inequality, but most homeowners or business people just don’t have the inclination to go to town hall and win a TIF.

And that’s the most outrageous thing about a narrow grant-driven renewal policy: those with appeal get breaks, and those who don’t – whether because of the small size of their stake, neighborhood, race or whatever – end up paying tax rates that are, in many cases, a large multiple of the effective rates paid by those who were connected enough to get a FIT or another pause before putting a shovel in the ground.

This inequity is also a current problem in downtown Baltimore. As new TIF subsidized properties have appeared online over the years, they have drawn business away from older, non-subsidized and therefore more expensive properties. Now, we are told, the solution is simply a bigger and broader TIF district, with hoped-for new investments guided by a mix of planners and decision-makers.

It will be both inefficient and inequitable. This would, in effect, be a reverse Robin Hood policy.

Instead, we need to reform Baltimore’s tax system to be competitive not just in areas specially designated for well-connected people, but to everything Baltimorese in everything his quarters. We can achieve this by building a competitive tax rate into the city charter, to be achieved in a series of steps that leaves room for adequate funding of vital city programs. Unless we do, a true Baltimore renaissance will always be beyond our reach, just on the horizon.